ATP synthase Photosystem III is located mostly in the grana thylakoids, whereas photosystem I and ATP synthase are mostly located in the stroma thylakoids and the outer layers of grana. The cytochrome b6f complex is distributed evenly throughout thylakoid membranes. Due to the separate location of the two photosystems in the thylakoid membrane system, mobile electron carriers are required to shuttle electrons between them.

Together, these proteins make use of light energy to drive electron transport chains that generate a chemiosmotic potential across the thylakoid membrane and NADPHa product of the terminal redox reaction. Photosystem These photosystems are light-driven redox centers, each consisting of an antenna complex that uses chlorophylls and accessory photosynthetic pigments such as carotenoids and phycobiliproteins to harvest light at a variety of wavelengths.

Each antenna complex has between and pigment molecules and the energy they absorb is shuttled by resonance energy transfer to a specialized chlorophyll a at the reaction center of each photosystem. When either of the two chlorophyll a molecules at the reaction center absorbs energy, an electron is excited and transferred to an electron-acceptor molecule.

Energetically, it is situated between the two photosystems and transfers electrons from photosystem II-plastoquinone to plastocyanin-photosystem Bioenergetics photosynthesis respiration. It is integrated into the thylakoid membrane with the CF1-part sticking into stroma.

Thus, ATP synthesis occurs on the stromal side of the thylakoids where the ATP is needed for the light-independent reactions of photosynthesis.

Lumen proteins[ edit ] The electron transport protein plastocyanin is present in the lumen and shuttles electrons from the cytochrome b6f protein complex to photosystem I. 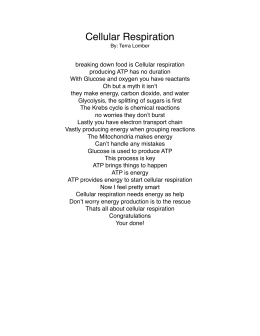 While plastoquinones are lipid-soluble and therefore move within the thylakoid membrane, plastocyanin moves through the thylakoid lumen. The lumen of the thylakoids is also the site of water oxidation by the oxygen evolving complex associated with the lumenal side of photosystem II.

Lumenal proteins can be predicted computationally based on their targeting signals. However, during the course of plastid evolution from their cyanobacterial endosymbiotic ancestors, extensive gene transfer from the chloroplast genome to the cell nucleus took place. This results in the four major thylakoid protein complexes being encoded in part by the chloroplast genome and in part by the nuclear genome.

Plants have developed several mechanisms to co-regulate the expression of the different subunits encoded in the two different organelles to assure the proper stoichiometry and assembly of these protein complexes.

For example, transcription of nuclear genes encoding parts of the photosynthetic apparatus is regulated by light. Biogenesis, stability and turnover of thylakoid protein complexes are regulated by phosphorylation via redox-sensitive kinases in the thylakoid membranes.

The redox state of the electron carrier plastoquinone in the thylakoid membrane directly affects the transcription of chloroplast genes encoding proteins of the reaction centers of the photosystems, thus counteracting imbalances in the electron transfer chain.

The different pathways utilize different signals and energy sources. The Sec secretory pathway requires ATP as energy source and consists of SecA, which binds to the imported protein and a Sec membrane complex to shuttle the protein across.

Proteins with a twin arginine motif in their thylakoid signal peptide are shuttled through the Tat twin arginine translocation pathway, which requires a membrane-bound Tat complex and the pH gradient as an energy source. Some other proteins are inserted into the membrane via the SRP signal recognition particle pathway.

Some transmembrane proteins may also spontaneously insert into the membrane from the stromal side without energy requirement. These include light-driven water oxidation and oxygen evolutionthe pumping of protons across the thylakoid membranes coupled with the electron transport chain of the photosystems and cytochrome complex, and ATP synthesis by the ATP synthase utilizing the generated proton gradient.

The water-splitting reaction occurs on the lumenal side of the thylakoid membrane and is driven by the light energy captured by the photosystems. This oxidation of water conveniently produces the waste product O2 that is vital for cellular respiration.

The molecular oxygen formed by the reaction is released into the atmosphere.cellular bioenergetics has extensively been studied independently, but little information is available on the the dependence of respiration and photosynthesis upon +)..,.

Note: Citations are based on reference standards. However, formatting rules can vary widely between applications and fields of interest or study. The specific requirements or preferences of your reviewing publisher, classroom teacher, institution or organization should be applied.

In this article, we'll explore the light-dependent reactions as they take place during photosynthesis in plants. We'll trace how light energy is absorbed by pigment molecules, how reaction center pigments pass excited electrons to an electron transport chain, and how the energetically "downhill" flow of electrons leads to synthesis of ATP and NADPH.